It's a digital world and artists need to get use to it..

Fine artists and Fine Art experts (so called) have been getting their knickers in a twist about "digital art" for a few years now. This culminated recently in my work being pulled without explanation by an art site.

Many "fine" artists will tell you digital art isn't real art or is inferior in some way. In order for it to be real art the artist must have produced it by hand preferably with a brush. Now this really is nonsense.

It's a digital world and some Luddites in the art world need to get used to it.

Elon Musk CEO OF SpaceX is a very clever guy and as far as I can see he creates rocket engines by waving his hands around in front of a monitor.


He makes rocket engines using his computer digitally and then guess what he prints them using a 3D printer and titanium. Nobody dare say to Elon.. "these aren't real rocket engines because you didn't personally hammer them into shape". I suspect if they did Elon would laugh in their face and show them out.

Are his rocket engines worse because he designs them and alters them digitally with his computer ? Nope they are likely to be better.

Ok I hear you say.. "there's a difference between rocket engines and art." True.. so lets talk about music.

Does anyone say to musicians they should stop going into studios to produce music.. because the end result is digital and therefore not real music. Real music has to be played live. I like live music.. but it is nonsense to say only live music is real music.

Even live musicians are recording their music, which is a digital process.
So if a musician decides that the crowd was noisier in Pittsburgh than in Delaware but the performance in Delaware was better.. and decides that he will take the crowd noise from Pittsburgh and add it to the performance in Delaware. Is that bad or good ? If you buy a download.. that's a digital download should I complain about it ? Of course not.. nobody cares.

Does anyone even refer to it as "digital music".. no ! Nobody is hung up about it, Which makes the often heated debate amongst fine artists even weirder.

Have you looked at art online ? All of that art is digital to an extent.. even the paintings.
I hear you say.. "Why" ?
Because it has been photographed and that creates a digital image that can be uploaded and viewed online. So when someone labels an artwork as a painting.. this isn't 100% true. I've yet to see painting dripping from inside my monitor. What you are looking at is "a DIGITAL photograph of a painting".  Heaven forbid the artist decides he will alter a color or line in the photograph because with each tweak it is less of a photograph of a painting and more a new digital work. This is the way this new digital world works.. it allows you to carry on being creative when you've finished a painting or drawing or photographing or designing a rocket engine.. whatever.

Supposing a I have two paintings one of the right side of my garden and the other is a painting of the left.. and I decide I will join the two photographs of these painting together digitally to make one picture of the whole garden. Of course if I tell you this work is a painting.. then that is a lie.  But it isn't really digital art either.

Does this somehow mean it isn't valid anymore ? Does it fig,
That's like saying recorded music isn't music ? Of course if you paid for a live concert and all they  played was recorded music that would also be a lie.

In my case I take images.. quite often loads of images and blend them digitally into one new image. Does this make it inferior in some way ?

I like you reader so I'm going to give you an image.. if you like it print it, hang it your wall, have it as my little present to you for putting up with my ramblings on all things digital.

It's a bit wide for this blog but I hope you like it. It's a panorama of Limasoll Bay in Cyprus. I was a bit sad really because Rita Ora jogged past and I missed taking a photo of her because I was too busy asking my wife who that woman was.. because she looked familiar. I thought it was Rihanna.  But I digress.

"It's a photograph".. I hear you mutter.  Well sort of.. its about ten different photographs.
In the days before you could easily do a panorama on your Iphone I created this image by merging these images together digitally (not that well, to be honest). So it is more a digital work than an actual photograph of the place. On the left hand side you can see the same couple both in the water and out of it. I'm not in the habit of painting my toe nails either so I admit my wife took a couple of the shots.. so the work becomes a digital photographic montage collaboration between myself and my wife. I'm also in the photograph doing an Alfred Hitchcock I'm the guy with the straw hat.. so I am included in a work I created digitally. "What a fraud" I hear you say "how can that be art if you didn't take the picture yourself ?" Why not ? It was my idea

When Ansel Adams (the famous photographer) was asked which equipment he used to make his photographs he replied "his eye".  I'm quite sure Ansel wouldn't be worrying about whether digital works are art.

That photograph (see how easy it is to still refer to it as a photograph) may be a good example of how "digital" is everywhere in art but it isn't really typical of what i do. In my case my creative process continues when I scan in drawings, paintings, photographs etc. Instead of finishing there I continue to work on them (digitally) until you can hardly recognise the original images.

I think this is where the whole debate about digital v traditional art becomes a nonsense. Because we can safely say that almost all the people viewing "art" are seeing it as a digital image most of the time, via monitors etc nobody worries one iota about it.  Even the paintings of the most traditionalist painters who spend their time attacking digital art are most likely seen by most as a digital image (photograph). The distinction between traditional and digital art exists only in the minds of a few artists.. its ALL just art. The ART is the creative part not the way it is produced.

In my case I tend to start with real drawings and scan them. I might also add in bits of photographs some digital some not, I then get to work on these bit using image manipulation software. The software can't make a bad image good.. that it is still down to the skill of the artist.

Here's an example of my art. You may or may not like it.. that's your choice. But in what way does the digital process of its creation make it not art ? You can see quite a lot of the image is drawn.. they are scanned drawings. But other parts are taken from photographs.. and other bits are scanned bits of text. The red sun is a red sticker taken from a jar of jam. When folks order this work I look for a sticker in the kitchen I can stick on the print I send them. What I like abut working this way is the ability it gives me to produce a different kind of imagery and to be flexible.  I can alter almost every print I produce. 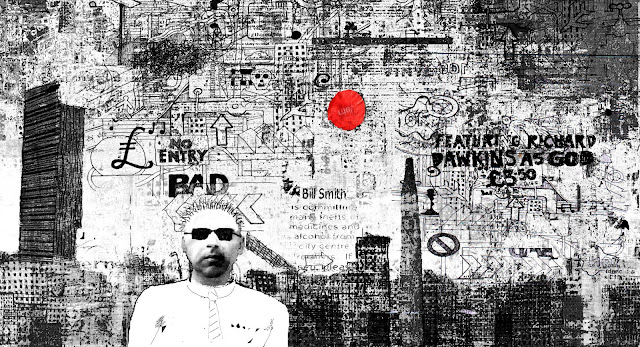 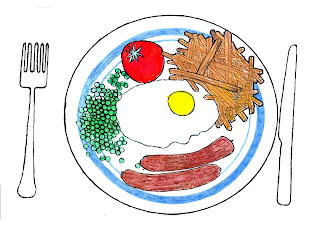 Now is this a drawing or a digital work because it isn't the same as the original drawing it is based on ?  I moved the sausages so does that mean it is now digital art ? The whole debate is very silly when you think about. It doesn't really matter to me what it is called but for the record I would label this a "print taken from a drawing" for a customer.

In no other area of human endeavour does the use of digital technology cause a similar debate.. its a digital world and visual artists need to get used to it.

Right thanks.. I got that off my chest and can go to sleep now.