Welsh politico's rip off my art.

I was recently made aware that my artwork was being used on a Welsh political commentary site called waleshome.org
with neither my consent or any accreditation. 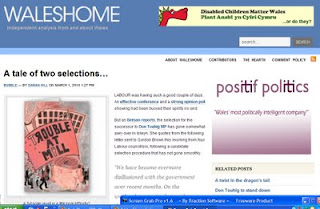 The image was removed after I contacted Daran Hill, the writer of the article. But in recent emails to Daran Hill and copied to Duncan and Adam Higgitt. It was Duncan Higgitt who responded (even though in previous emails he has denied working for the site) he also refuses to accept that payment is due for the 15mths my image was used on the site prior to its removal. It says on the site that Daran Hill is the editor..

This I believe is the same Daran Hill who recently appeared on the main UK wide BBC evening news as a commentator on Welsh political affairs.
"..is a political commentator and also manages Wales’ fastest growing public affairs firm, Positif Politics, which he founded in 2006. After ten years in the profession, he is one of the most authoritative public affairs consultants in Wales, is well-connected across the political spectrum, and is a current Executive Member and former Chair of Public Affairs Cymru, a Trustee of the Bevan Foundation and a Fellow of Institute of Welsh Affairs. His experience and communications ability has been recognised in numerous media performances. In 1997 he was National Organiser of the successful “Yes for Wales” devolution campaign, which won the referendum that led to the establishment of the National Assembly."

"Duncan Higgitt is a former editor and journalist with, among others, the Western Mail. After serving with the British army, he worked his way up through local free sheets and weeklies before joining the Western Mail in 1997 as a district reporter covering Mid Wales. He went on to work as news editor and features editor for the paper. He is press and political officer for Bethan Jenkins AM."

I wonder what senior management at the BBC would think about their casual approach to intellectual property rights ? I've exchanged a few emails with several people associated with waleshome.org. You will notice if you have a look that quite a few prominent Welsh politicians and media types are regular contributors to the site. I've contacted several of these people over the last couple of weeks and they seem curiously reluctant to come out against the site. Does this indicate that the political establishment in Wales have a casual approach to intellectual property rights ?

The domain name is registered to Adam Higgitt who is identified as an editor of the site.
"..is the former Head of Policy for the Welsh Labour Party and author of the party’s 2003 manifesto. As a Special Adviser in the Northern Ireland Office, he was involved in negotiations to restore devolution and accelerate paramilitary decommissioning. He now works for Ofcom, and writes for WalesHome.org in a personal capacity. Adam is responsible for the Home Truths and Review columns."

I am amazed these people are happy to be contributors to a site that does not seem to think artists should be paid for the use of their work.

I think political commentary and punditary is their business and
waleshome is a vehicle for delivering this.
Looking at their CV's on the site they are hardly those of hobbists !

I requested the details of ownership, address etc to make my complaint official, they would not provide them. The information doesn't appear anywhere on the waleshome.org site, IMO this is a prerequisite for any legitimate organisation.

I really am quite appalled that people who place themselves in positions of authority seem to have such a cavalier attitude to intellectual property rights. Also politicians who associate themselves with an organization that believes they are immune to the law or that it does not apply to them must also become questionable as to how they will implement the law.

The future of democracy, enterprise and the rule of law is clearly safe at waleshome.org !

Please feel free to pop over to waleshome.org and express your displeasure at their actions

To be continued and expanded..
Posted by Andy Mercer at 22:08

As a "shown" but unpublished artist, I am appalled that this crew should hide behind their credentials and try to pass as hobbyists. If one has a small local hobby presence,one might be forgiven for not referencing "borrowed" material, but here there is no excuse. The blatant obfuscation emphasizes what may be their presumption that the starving artist bumpkins fell off the turnip truck and do not know the laws of intellectual property.
Bah.
We think; we read; we produce. We should be paid for our labor.

Hobbyist or not, that is no excuse for choosing not to obey the law. Politicians associated with an organization that believes they are immune to the law or that it does not apply to them are questionable as to how they will support the law. Daran Hill sounds like he's been around for longer than a few years and has an awareness of what the law is. He broke the law and was caught. He should make proper restitution.

This URL has the address info on the plagarist : http://whois.domaintools.com/waleshome.org
Adam Higgitt
37 Bygrave Road
Baldock
Hertfordshire
SG75DD
GB
1.41462892206
adam@higgitt.net
Hope you get this resolved!
A fellow artist,
Nina